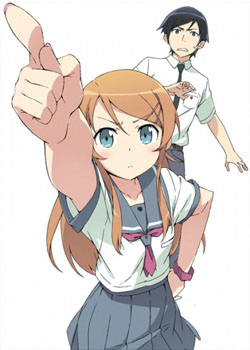 There is no way a series with a title so long could be taken seriously! Or could it?
Advertisement:

Kyousuke Kousaka is, by his own admission, a completely and extremely normal seventeen-year-old high schooler who values normalcy, to the point that his goal in life is to ultimately have a completely normal one.

The catch: his relationship with his younger sister — extremely brilliant fourteen-year-old middle schooler Kirino — is, to put it mildly, bad... so bad neither of them even bother acknowledging each other's existence, except when it's absolutely necessary.

That "absolute necessity" came the day Kyousuke picks up a DVD case Kirino dropped — specifically, one of Magical Girl anime Stardust Witch Meruru. This surprises him, but not as much as what was actually in the case — an H-Game titled Imouto to Koishiyo! (Let's Love Little Sister!). This sets off a chain of events that leads to the Kousaka siblings' first actual conversation in years, with Kyousuke learning that Kirino is a closet Otaku — a "little sister" fangirl, to be exact — and getting dragged into increasingly hilarious situations, most being started in some way by his sister.

Oreimo (short for Ore no Imouto ga Konna ni Kawaii Wake ga Nai, or "There's No Way My Little Sister Can Be This Cute") is a comedy Light Novel series with several adaptations. A 12-episode anime adaptation aired in fall 2010. It had an anime-original ending which was called the "good end" by AIC, followed by a 4-episode "true" ending that followed the novel more closely and aired as webisodes before being released to Blu-ray/DVD. A second season that follows the True End aired as a part of Spring 2013 Anime season. Both of the two seasons and three-part episode series finale can be viewed legally at Crunchyroll under the name Oreimo here.

Aniplex USA licensed the anime for a North American release.

A manga adaptation of the same name ran from 2009 to 2011, while a Spin-Off manga starring the popular Kuroneko titled Ore no Kouhai ga Konna ni Kawaii Wake ga Nai! ("There's No Way My Junior Can Be This Cute!") by the same mangaka has begun in 2011. A PSP (non-canon) Visual Novel featuring a route for each girl has been released, with a full fan translation of its expanded version.

A second visual novel (for the PS3) has also been released. A clean copy of the original light novel is available here.

The author, Tsukasa Fushimi, and Kazuma Kamachi have co-written a crossover web series between this and A Certain Magical Index called Ore no Imouto to Railgun Collaboration Project!

Kirino was chosen to represent Oreimo in the crossover Fighting Game Dengeki Bunko: Fighting Climax by Sega, where she uses several cosplay outfits in battle. Kuroneko was chosen as one of the support characters.

There's no way this anime can be this Troperiffic!