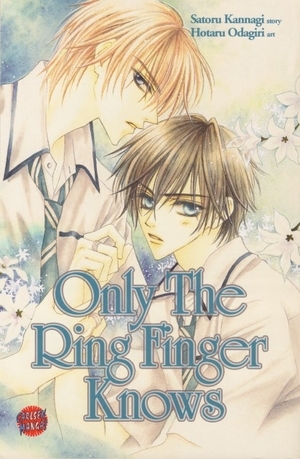 Let them say what they wanna say, only our ring fingers know the truth.
Advertisement:

Yuichi Kazuki is wealthy, handsome, intelligent, and adored by everyone at his school for being courteous and kind to everyone... except for Wataru Fujii. To make matters worse, in a high school where it's the fashion for couples to wear matching rings, Kazuki turns out to own a ring identical to the one that Wataru wears, a fact Wataru discovers only when he and Kazuki switch rings by accident. From that moment, it seems like nothing goes right for Wataru, and he can't figure out why he of all people is the only one to see this unexpectedly rude and arrogant side of Kazuki.

A Boys' Love Light Novel series with five volumes and a manga adaptation of half the first volume, written by Satoru Kannagi and illustrated by Hotaru Odagiri.

Only the Ring Finger Knows is often a Gateway Series to the Boys' Love Genre thanks to the pretty art and its work-safe nature (nothing beyond kissing in the manga and the sex scenes in the novels are quite tame as they focus on the feelings of the characters rather than describing the acts). All novels and the manga are licensed in the U.S. and Germany.

Only the Ring Finger Knows contains examples of: