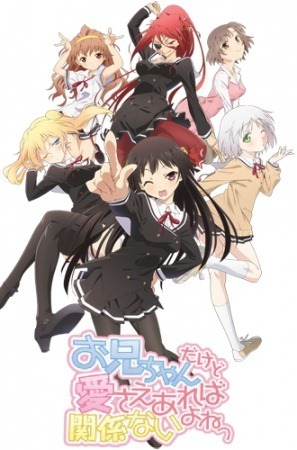 After six years of living apart due to their parents' death, Himenokouji Akito decides to have his younger twin sister, Akiko, living together with him as a family. The problem is, Akiko is deeply in love with him and unashamed of it, actually displaying her incestuous affection beyond common sense instead.

The wackiness of Akito's life actually had already been quite severe even before his sister's arrival. As a caretaker of his school's student council's dorm house, he had been living together in said house with the three members of student council who happen to be attractive yet very... unique girls: Arashi Nikaidou, Anastasia Nasuhara, and Haruomi Ginbei Sawatari. Another girl, Akito's stepsibling Arisa Takanomiya, arrives later in the anime as a housekeeper. They are all craving for Akito's affection.

This light novel series, whose Overly Long Title translates to "As Long As There's Love, It Doesn't Matter If He's My Brother, Right?" and which is often shortened to OniAi, was made into an anime by SILVER LINK. studio and aired during the 2012 fall season. The anime can be viewed legally online

(although as usual, they encourage people to support legal releases and streams if they want their favorite anime to dubbed).

This light novel/anime series makes use of these following tropes: