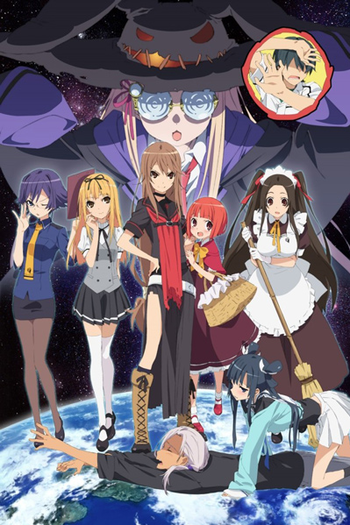 At Otogi Academy, there is an organization that helps people out, the Otogi Bank. Headed by the Kiriki cousins, Liszt and Alice, their members consist of the maid Tsurugaya Otsuu, the mad scientist/witch Majolica le Fay, the couple of Otohime Ryugu and Taro Urashima, and a prominent fighting duo, Ryōko Ōkami and Ringo Akai, the wolf and Little Red Riding Hood. One day, Ryōko is confessed to by the painfully shy Ryōshi Morino, who finds himself shanghaied into joining the Otogi Bank to help people and fight against Onigashima High, the delinquent rival school ruled by Student Council President Shiro Hitsujikai, a man who seems to have a connection to Ryōko.

Based on a series of light novels, an anime adaptation, Ōkami-san to Shichinin no Nakama-tachi or Ōkami-san and Her Seven Companions, which takes its name from the first novel in the series, was produced by JC Staff and aired in the summer of 2010.

Licensed by Funimation in 2011, with the DVD/Blu-Ray released in April 2012. Not related to Ōkami.

is not that he is picky, perfectionist, or misogynistic, but because he knows Chuutarou and his childhood friend have a mutual crush and both would be miserable if he chose someone else. Chuutarou had heard a rumor that his friend liked a boy, but decided I Want My Beloved to Be Happy and went looking for another girl without even asking her who the boy she liked was.