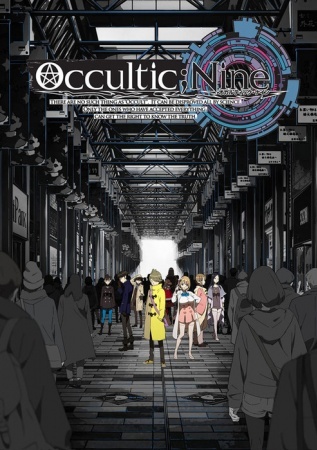 There are no such thing as "Occult". It can be disproved all by science.
Only the ones who have accepted everything.
Can get the right to know the truth.
Advertisement:

Occultic;Nine (オカルティック・ナイン Okarutikku Nain) is a Japanese light novel series written by Chiyomaru Shikura, the creator of Steins;Gate, with illustrations by pako. The series is licensed in English by J-Novel Club. A manga, illustrated by Ganjii, began serialization in October 2015. An anime television series adaptation by A-1 Pictures aired in the Fall 2016 Anime season for 12 episodes, beginning on 9 October. A visual novel adaptation for the PS4, Vita and Xbox ONE was released in Japan on November 9, 2017. A Nintendo Switch version is in the works.

The story follows nine idiosyncratic individuals, linked by the "Choujou Kagaku Kirikiri Basara" occult summary blog run by 17-year-old second-year high school student Yuuta Gamon. Little incongruities that occur around these nine eventually lead to a larger, unimaginable event that may alter what is considered common sense in this world.

Despite the semicolon in the title and being from the same creators, the series is not part of the Science Adventure Series (SciADV) but is instead part of its own universe (titled the Science Visual Novels Series) with upcoming visual novel Anonymous;Code. The SciADV Series do however exist as their fictional game versions in this universe. Well at least until Shikura suddenly went back on that claim.

The anime is licensed in America by Aniplex USA and in Australia by Madman Entertainment. Aniplex are releasing the series with an English dub by Bang Zoom! Entertainment in 2 Blu-ray sets, with Volume 1 releasing on September 26th and Volume 2 on December 26, 2017