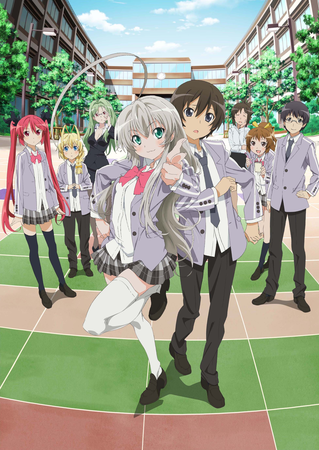 She is the Chaos that always crawls up to you with a smile!
Mahiro Yasaka is an Ordinary High-School Student who happens to be a fan of the Cthulhu Mythos. One day he was attacked by a creature he identifies as a nightgaunt, only to be saved by a Mystical White Haired girl ... who introduces herself as none other than the Crawling Chaos, Nyarlathotep.
Advertisement:

Nyaruko: Crawling With Love! (a.k.a. Haiyore! Nyaruko-san) is a 2009-2014 Romantic Comedy Light Novel series written by Manta Aisora and illustrated by Koin (of Kanokon fame) with elements from Toku and the Cthulhu Mythos. It's actually Lovecraft Lite, and it doesn't take itself all that seriously: It turns out that while the mythos beings are real, H. P. Lovecraft pretty much exaggerated the stories from his Nyarlathotepian friend and turned them into horror tales.

. This was followed by second season named Haiyore! Nyarko-san W, which aired during the Spring 2013 Anime lineup. Haiyore! Nyarko-san F, an OVA intended to adapt the rest of the novels, was announced in 2014, but stalled out after a single episode (possibly because of the tragic passing of Cuuko's seiyuu Miyu Matsuki). The franchise also received a Visual Novel for the PS Vita, and characters from the series will appear alongside many others in Sega's Crossover rhythm game Miracle Girls Festival.

Being a slapstick comedy based on the Cthulhu Mythos, it's a pretty violent story. It is also a hurricane of anime, manga and RPG Shout Outs and Mythos-ology Gags, and Kamen Rider. Lots of Kamen Rider.

Crunchyroll streamed both TV seasons under the title Nyarko-san: Another Crawling Chaos, releasing the two Nyaruani series before the first to drum up interest; all four shows can watched for free here.

The two TV seasons were later licensed by NIS America under the title Nyaruko: Crawling with Love! (and Second Season for W), releasing both as sub-only Blu-rays.

Compare to The Elder Sister-like One, a series with a similar premise but with Shub-Niggurath as the moe-ified Mythos monster.

These are the Tropes that crawl up to us with a smile!