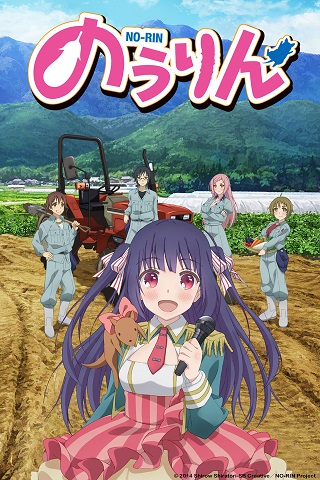 No-Rin (のうりん Nōrin) is a Japanese light novel series written by Shirow Shiratori, with illustrations by Kippu. An anime adaptation by SILVER LINK. aired as a part of the Winter 2014 lineup.

When nationally-renowned Idol Singer Yuka Kusakabe suddenly announced her retirement, it was understandably a cause for shock, but none took the news the hardest than her number-one fan: Kousaku Hata, a boy her age from Tamo, Gifu Prefecture. It shook him to such extents that he locked himself away in his dorm room for days, and his classmates at the Tamo Agricultural School only barely managed to force him to get out of his dorm room and move on with his life.

One day, however, to everyone's amazement and confusion, a New Transfer Student comes into Kosaku's class — and it's none other than "Yuka-tan" herself, transferring under her real name, Ringo Kinoshita. Kousaku realizes that perhaps her retirement is a blessing in disguise, and so jumps at a once-in-a-lifetime chance to get to know his idol up close and, together with his friends Minori Nakazawa and Kei Kamatori, try to find out what is she doing in the countryside... and maybe become more than just classmates.