Light Novel / No Game No Life 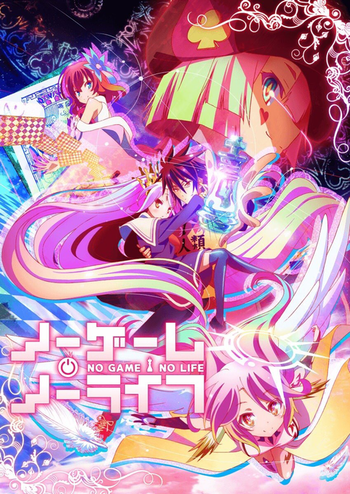 "This blank space represents infinite potential. One day, it may become anything."
"Have you two siblings ever felt that you were born into the wrong world?"
Advertisement:

Among hardcore MMORPGs players, there exists a Living Legend known only as "『  』" (literally a blank space), a video game account infamous for dominating nearly every game they touched upon. In Real Life, however, "『  』" is actually a pair of NEET gamers: Sora, aged eighteen, and his stepsister Shiro, aged eleven. Bored of their daily existence, one day they receive a mysterious email—one that knows that "『  』" are two people—questioning their life.

Determined to protect their identity, the step-siblings play (and win) an online chess game (hotlinked onto the email) with this mysterious sender, culminating in the latter offering them a chance to be "reborn" into their "ideal" world. Before they can react, however, Shiro and Sora are summarily transported to the world of Disboard, ruled by an entity who identifies as "Tet", where violence is outlawed and where all disputes, trivial or serious, are settled with games.

But just as they decided that they prefer their new lives at Disboard, Shiro and Sora discover a startling truth: Disboard is divided between sixteen Exceeds (sentient races), of which Imanity, the most humanoid of the lot, are ranked dead-last—and without powers of magic, they have become a dying race now reduced to the city-state of Elchea. And before they know it, this brother-and-sister gamer team, together with Stephanie Dora, granddaughter of the last king of Elchea, and Jibril, the angelic custodian of the National Library of Elchea, would have to push their gaming skills to the limit (and beyond) if they want humans to still have a future... even as they build their power to one day challenge Tet anew.

No Game No Life is an ongoing 2012 light novel series written and illustrated by Yuu Kamiya (a pseudonym for Brazilian-Japanese Thiago Furukawa Lucas), published under Media Factory's MF Bunko J imprint. It has also received a 2013 manga adaptation illustrated by Mashiro Hiiragi and published under Media Factory's Monthly Comic Alive magazine, as well as an anime adaptation directed by Atsuko Ishizuka (The Pet Girl of Sakurasou) and produced by Madhouse as part of the Spring 2014 Anime season.

A Big Damn Movie was released for the series, which adapts the 6th book of the Light Novel. Titled No Game No Life Zero, the movie, like the 6th book, is a prequel set 6000 years before the main series.

Compare with Problem Children Are Coming from Another World, Aren't They?, another Trapped in Another World light-novel/anime about a world that runs on games.