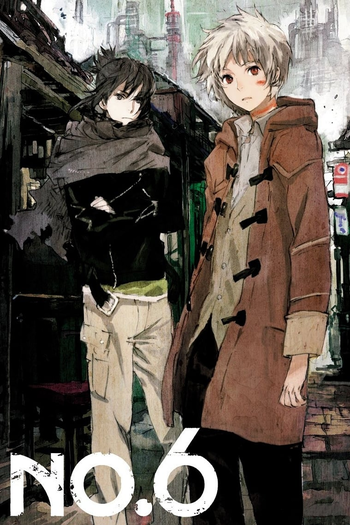 In a high-class segregated society 20 Minutes into the Future, the young genius Shion helps a convicted boy escape from the soldiers pursuing him, resulting in Shion's subsequent demotion and loss of his special privileges. Four years later, he finds himself serving in the maintenance crew of the city park, until events conspire for the two to meet again, kicking off a series of events that cause Shion to question everything he has ever been told about the city he calls home — No. 6.
Advertisement:

An anime series based on Atsuko Asano's light novels was part of the Summer 2011 noitaminA Lineup, courtesy of Studio BONES. There is also a manga series drawn by Kino Hinoki.

Oh, and do note that, despite the similarities in name, the story has nothing to with a certain Blue Submarine fleet.