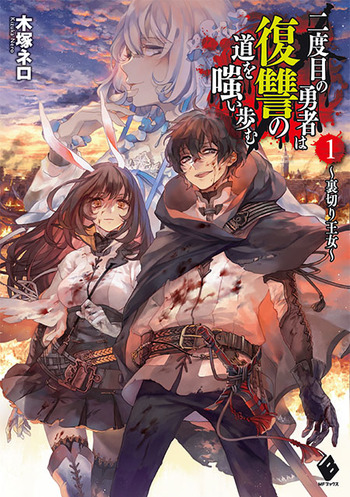 Behold the "cute" couple on their path to vengeance.
Advertisement:

Kaito was summoned to an JRPG-style world as the only hope against evil. After three years of desperate struggle, he defeated the Demon Lord and saved the world. But that was only the start of his troubles.

The companions that he had trusted throughout his journey turned on him and blamed him for their own disgusting crimes against humanity, and hunted him down for a year before finally ending his life with a knife through his chest.

It was then that he swore to himself. He swore that, if given another chance, he would no longer so rigidly cling to the concept of "blind faith". Instead he would dedicate himself to enacting the most atrocious act of revenge possible and he would do things right.

And so, he died, leaving behind a pool of blood and a series of menacing last words — but his story had yet to end. A voice resounded through his head and informed him that there was more to his fate than what lay beyond the grave.

【The following is a system message. Tutorial Mode has been terminated.】

Full title is Nidome no Yuusha wa Fukushuu no Michi wo Warai Ayumu. ~Maou yo, Sekai no Hanbun wo Yaru Kara Ore to Fukushuu wo Shiyou~ or The Hero is Walking the Second Time on the Path of Vengeance While Laughing ~ Maou, I’m Going to Give You Half of the World so Take Vengeance with Me~

Compare to Redo of Healer, another Light Novel starring a hero who is betrayed and endures horrible abuse, then magically time-travels to before his adventure started, becomes a Villain Protagonist with a harem, and seeks revenge on the princess and all the other heroes who wronged him.