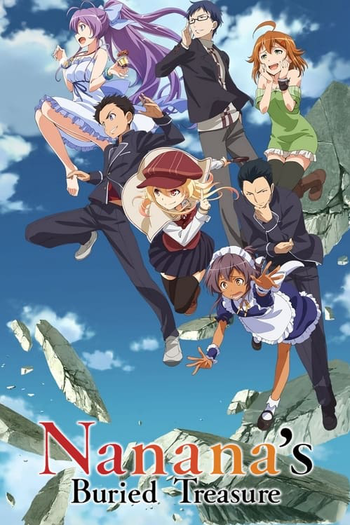 Nanana's Buried Treasure (Ryuugajou Nanana no Maizouki) is a Light Novel series written by Kazuma Ōtorino with art done by Akaringo, and it was published by Enterbrain under its Famitsu Bunko imprint. The series was published from 2012 to 2016, with a total of 12 volumes. A manga adaptation by Hitoshi Okuda also began at the same time, and was serialized in Famitsu's Comic Clear magazine from 2012 to 2013. An anime adaptation by A-1 Pictures aired as part of the Spring 2014 season in the noitaminA time slot and is viewable online at Crunchyroll.

Juugo Yama has every reason to be happy. Sure, he might have been kicked out of his house by his own father, and has little money to speak of now, but now he's free to go where he wants, and that place is Nanaejima, a "special student zone" built on several artificial islands filled with all sorts of schools and research facilities.

Given how he has little money though, he is forced to take up residence in a suspiciously low-rent apartment... And he soon finds out why the rent is so low: it's currently haunted by its former owner, one Nanana Ryuugajou, who was murdered there by unknown parties ten years before. Since then she's been bound to the apartment, unable to move on, despite the previous efforts of all of her friends, including the pretty if hard-drinking dorm manager, Maboro Shiki.

Despite being very very dead, Nanana herself doesn't treat her current situation as a big deal, and makes the most of her situation. She treats the apartment as her personal gaming den, due to how its suspiciously furnished with the latest games, consoles, and a high-spec PC seemingly configured for online gaming. And since she doesn't need to sleep anymore, Nanana does this 24-7, without pause.

With no more money to look for another place, Juugo is forced to get used to his new roommate, but his curiosity for the details of Nanana's death gets the better of him, and he soon finds out that Nanana is anything but an ordinary ghost: in fact, she's one of the primary reasons why Nanaejima is even in existence, having provided most of its starting funding through the treasures she found during her adventuring! And of particular note is the so-called Nanana Collection, a set of treasures that possess strange powers, which are hidden away among the islands of Nanaejima. Some of them have been found, but not all of them, and these are the object of continuing speculation... And may have played a part in why Nanana was murdered in the first place.

Just what has he gotten himself into, anyway?