Light Novel / NAKAIMO - My Little Sister is Among Them! 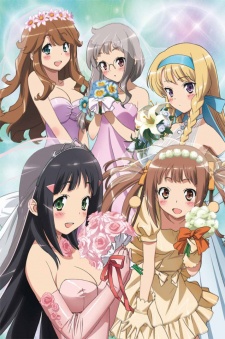 In accordance with his father Kumagoro's will, Shougo Mikadono transfers to the school that his future wife is said to be attending. But also attending the school is Shougo's younger sister, who was separated from him at birth, and he doesn't know what she looks like - but she attempts to get close to him without revealing who she is! Can Shougo figure out which of the girls at this school is his sister and find his destined life partner at the same time?
Advertisement:

Kono Naka ni Hitori, Imouto ga Iru! (One of the Girls Here is My Little Sister!) is a Light Novel series with similarities to Princess Lover! and Oreimo.

Viewers in the United States can watch the anime legally at Crunchyroll under the name Nakaimo - My Sister is Among Them!

. Sentai Filmworks released the series on DVD as NAKAIMO - My Little Sister is Among Them!, and has put the series up for legal streaming on The Anime Network under that title.