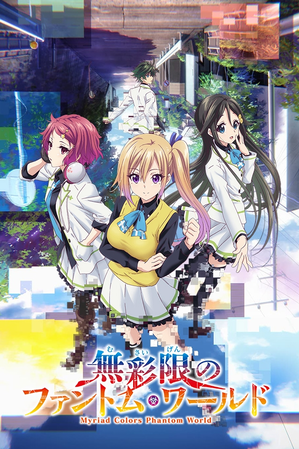 Myriad Colors Phantom World is a Japanese light novel series written by Souichirou Hatano and illustrated by Shirabi. An animated adaptation produced by Kyoto Animation aired from January 7, 2016 and March 31, 2016. The show was directed by Tatsuya Ishihara, with Fumihiko Shimo serving as series composer, and Kazumi Ikeda as character designer and chief animation director.

A mysterious incident 10 years prior changed how humans perceive the world, allowing them to see creatures long thought imaginary. These formerly mythical beings, called Phantoms, come in all sorts of shapes and sizes. The incident also imbued certain people with special abilities. Haruhiko Ichijo possesses a special ability allowing him to seal Phantoms by drawing them in a sketchbook. Along with his classmate Mai Kawakami, Haruhiko is a member of the Hosea Academy Neural Error Corrections Club, where students accept jobs handling Phantoms in exchange for useful household goods. Unfortunately for them, Team E (consisting only of Haruhiko and Mai) have the worst performance record out of all teams. In an effort to change this, Haruhiko and Mai set out to find more members to join their team.

Important to note that Myriad Colors Phantom World was just a single volume light novel for a long time since its debut in 2013, with the second volume only coming out at the end of 2015 and the third announced for later in 2016, so it’s pretty justified from KyoAni to follow its own original scenarios to fill a 13 episodes Anime (plus one OVA) in this particular case.