Light Novel / My Youth Romantic Comedy Is Wrong, as I Expected 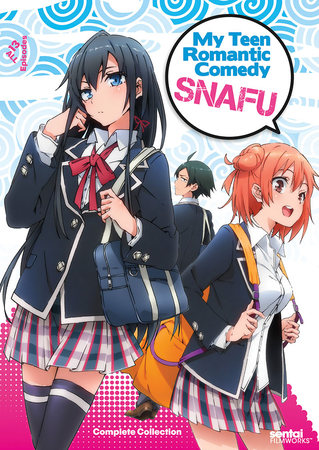 My Youth Romantic Comedy Is Wrong, as I Expected (やはり俺の青春ラブコメはまちがっている。— Yahari Ore no Seishun Love Come wa Machigatteiru), often abbreviated as OreGairu because of its lengthy title, is a 14 volume series of Light Novels written by Wataru Watari and illustrated by Ponkan8, which was published from 2011 to 2021 under the Gagag Bunko imprint.

Our protagonist is a deeply cynical, anti-social second year male high school student named Hachiman Hikigaya who believes that happiness of youth life is a lie and should just die. Concerned by his personality, his guidance counselor at his school forces Hachiman to join a "Service Club" where he, along with an equally problematic student, Yukino Yukinoshita, must provide help for any troubled schoolmate who requests it. Hilarity Ensues as Hachiman starts to reshape himself and those around him.

The anime is currently streaming on Crunchyroll

. Viewers in the United States, Canada, South Africa, Finland, Norway, Sweden and Denmark may watch it legally there. (Also on The Anime Network