Light Novel / My Next Life as a Villainess: All Routes Lead to Doom! 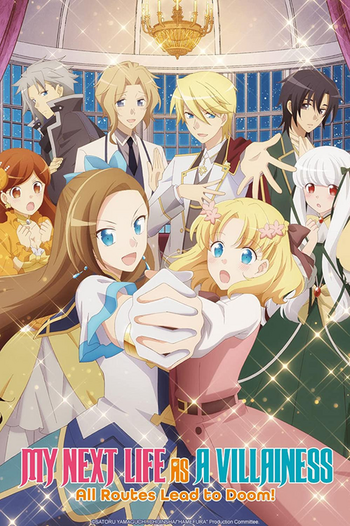 "There isn't just one otome route!"note From clockwise at bottom left: Catarina Claes, Mary Hunt, Alan Stuart, Keith Claes, Geordo Stuart, Nicol Ascart, Sophia Ascart and Maria Campbell
"It can't ...it just can't be true! But the more I look into it, I think it is. This is the world of Fortune Lover! And that means I'm...I'm on the path to doom!"
— Catarina Claes, realizing she's a Self-Disposing Villainess in a Romance Game
Advertisement:

Eight-year-old Catarina Claes had it all—as the only child of a prominent duke, not only does she almost always get what she wants, but is set to be engaged to Geordo Stuart, the third prince of the Kingdom of Sorcier. All that changed one day when, during a visit by Geordo, she slipped and hit her head on a rock, knocking her out for five days. And when she awoke, she had an epiphany:

In her past life, she was a seventeen-year-old otaku schoolgirl from modern-day Japan who has apparently been reincarnated into the world of Fortune Lover, an otome game she played before her death. And, more alarmingly, she appears to have reincarnated into the villainess of the game, condemned in seven years' time for harassing Maria Campbell, the protagonist of Fortune Lover with whom the male cast is destined to fall in love. No matter which of the boys Maria falls in love with, or how well the relationship goes, the stories almost all end with Catarina either dead or exiled from the kingdom.

Of course, Catarina is not going to take her ordained fates lying down, and thus spends the next seven years taking measures to save herself including changing her personality for the better.

That simple decision, however, will begin a string of changes to the world of Fortune Lover—love interests, rivals, etc.—in ways far beyond her wildest imagination. And it doesn't help that for all her intuition about the situation she finds herself in and her insight into improving herself, in other ways Catarina... might not be the sharpest tool in the shed.

My Next Life as a Villainess: All Routes Lead to Doom! (乙女ゲームの破滅フラグしかない悪役令嬢に転生してしまった… / Otome Game no Hametsu Flag shika nai Akuyaku Reijō ni Tensei Shiteshimatta... / I Reincarnated into an Otome Game as a Villainess With Only Destruction Flags..., also shortened as HameFura or Destruction Flag Otome) is an ongoing 2014 web novel series written by Satoru Yamaguchi and published by the website Shōsetsuka ni Narō ("Let's Become a Publisher"), later adapted into an ongoing 2015 light novel series illustrated by Nami Hidaka and published by Ichijinsa. It also has an ongoing 2017 manga adaptation, also illustrated by Hidaka and published under Ichijinsa's Monthly Comic Zero Sum imprint.

An anime adaptation written by Megumi Shimizu and directed by Keisuke Inoue for SILVER LINK. began airing in April 2020, with a second season, My Next Life as a Villainess X, premiering in July 2021.

A manga spinoff, My Next Life as a Villainess Side Story: On the Verge of Doom! (乙女ゲームの破滅フラグ スピンオフ…絶体絶命！破滅寸前編 / Otome Game no Hametsu Flag shika nai Akuyaku Reijou ni Tensei shite shimatta... Zettai Zetsumei! Hametsu Sunzen Hen / I Reincarnated into an Otome Game as a Villainess With Only Destruction Flags... In a Dire Situation!? Verge of Destruction Arc), illustrated by Nishi and also published at Monthly Comic Zero Sum, ran from 2019 to 2021, set in an Alternate Timeline where Catarina didn't hit her head and regain her memories until the time the Fortune Lover game's plot starts.

The special edition 7th volume of the manga adaptation was bundled with a brand-new original anime Blu-Ray Disc on September 30, 2021, which adapted a story from the original light novel series' first volume about the main characters' early childhoods.note See Switching P.O.V. in the trope list. The 11th light novel volume also includes an original story linking to episode 5 of Villainess X.

A 4koma crossover, HameFura x Arte (はめふら✕アルテ), ran on Twitter in 2020, done as an official collaboration by their anime studios.

The main series is currently licensed in English by J-Novel Club, with its manga adaptation handled by Seven Seas Entertainment. Seven Seas have also licensed On the Verge of Doom! and the GIRLS PATCH anthology.

A visual novel set after graduation came out on December 23, 2021, in Japan only, titled My Next Life as a Villainess: All Routes Lead to Doom! The Pirate Known as "Trouble". Trailer here.