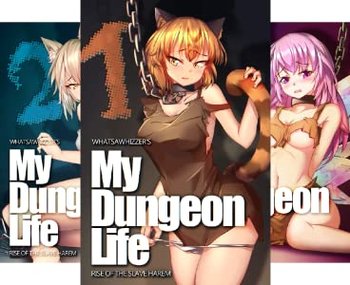 This is an English-text novel in the light-novel format inspired by Slave Harem in the Labyrinth of the Other World, written by Whatsawhizzer

and hosted online by Scribble Hub

and his own blog, with hard-copies available for purchase through online stores. The first volume was written and placed online around April 6, 2019, with the most recent chapter, 275, released to the public on September 28, 2020. Additional chapters are usually released to the public, for free perusal, about three chapters a day for six days a week. Patreon supporters can access image galleries and chapters in advance.

An overweight teenage boy, later named Deek Williams, is cruelly dumped by a girl who was stringing him along until he aced her final project, with the rest of her Girl Posse laughing at him, all of them calling him a "stinky fatass" and dubbing him an idiot for even thinking he had a chance. As if that wasn't bad enough, the entire sporting club beat him mercilessly for the "crime" of asking her out in the first place, because the team captain of the baseball team had his eye on her without Deek's knowledge.
When he gets home, there's no one to greet him because his father had abandoned the family long ago, and his poor Struggling Single Mother works multiple jobs to try and make ends meet.
Looking to drown his sorrows by immersing himself in one or more of the bargain basement Nintendo cartridge games he bought at a bargain bin grab-bag sale, he stumbles on a package with no label, no graphics, and no instructions. He plugs it in and no sooner does he finish setting up his character than he's unconscious and finds himself in the village of Chalm, in the kingdom of Alberis, having to learn how the new world works without any tutorial, explanation, or guide.