Light Novel / My Mental Choices Are... 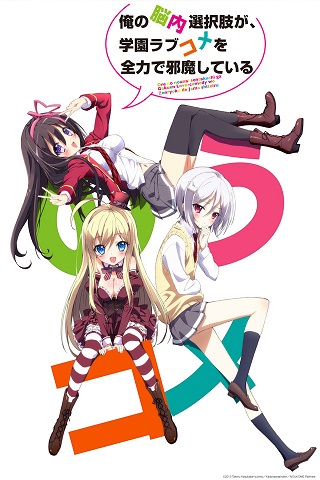 Kanade Amakusa is a high school student who is suffering from a curse dubbed "Absolute Choice." This curse requires him to select an action from a list of two or three random options that appear before him at any given time, with no control over what type of choices appear (although there may have been some sort of karmic influence at times). If he hesitates for too long or tries to refuse, he is wracked with sudden, painful headaches. Many of these choices are perverse or just outright bizarre, making his school life very difficult. However, one day, a choice he makes on his way home from school causes a mysterious, beautiful young girl to fall from the sky. Amakusa discovers that she was sent from the God World to assist him in completing a series of missions given to him directly by God himself. After completing these missions, the "Absolute Choices" curse will be lifted from Amakusa; but should he fail in completing any of the missions, he will be stuck with the curse forever.

My Mental Choices are Completely Interfering with my School Romantic Comedy (俺の脳内選択肢が、学園ラブコメを全力で邪魔している Ore no Nōnai Sentakushi ga, Gakuen Rabu Kome o Zenryoku de Jama Shiteiru), also known by the abbreviation Noucome (のうコメ Nōkome), is a Japanese light novel series written by Takeru Kasukabe, with illustrations by Yukiwo. Twelve volumes were published by Kadokawa Shoten from February 1, 2012 to February 1, 2016. A manga adaptation by Sayaka Itsuki was serialized in Enterbrain's Famitsu Comic Clear, which ran from February 1, 2013 to May 1, 2015 for five volumes. An anime adaptation, directed by Takayuki Inagaki and produced by Diomedea, aired as a part of the Fall 2013 Anime season.

Crunchyroll is streaming the anime, and can be watched legally here

Not to be confused with My Teen Romantic Comedy SNAFU.

Tropes appearing in this Anime