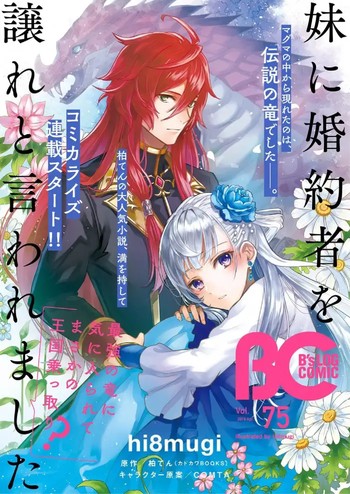 In the hopes of pleasing her father and bringing prestige and honor to the Lumiere family, Eliana, the eldest daughter of the Duke of Lumiere, has been training hard for years to be the best marriage candidate for Alvin, the crown prince of Threnvale.

Her efforts finally pay off, and she ends up getting engaged to the prince, despite not having any feelings for him. Things go awry, however, when Eliana's bratty little sister, Luna, demands that her hand in marriage should be given to the prince instead, as she is the one who truly loves him. After Eliana rebuffs her demands, Luna ends up throwing a fit and refuses to get out of bed for days, and won't eat or drink until she is given what she wants. The Duke of Lumiere gives in, believing that it doesn't really matter which of his daughters marries the prince, as their social status isn't going to fall any further.

When Eliana hears that her engagement to the prince will be given to Luna instead, she runs into her room in despair. She then looks up at a painting of a dragon and decides that she will sacrifice herself as a dragon bride to give her family prosperity in accordance with an old tradition that involves families sacrificing their daughters to a dragon that lives at the bottom of a volcano in order to be granted eternal prestige and harvest as well as a yearly stipend from the kingdom. But just when she jumps off a cliff into a pool of magma inside a volcano, a huge red dragon swoops in and swallows her. He quickly spits her out once he realizes that she is a human.

After Eliana comes to, she sees that there really was a dragon at the bottom of the volcano. The dragon then shifts into his human form and introduces himself as the "Avaricious Greed" of the seven dragon pillars and decides to humor the dragon bride custom of her culture by taking her in as his bride.

Imouto ni Fianse wo Yuzure to Iwaremashita, Saikyou no Ryuu ni Kiniirarete Masakano Okoku Nottori?(妹に婚約者を譲れと言われました 最強の竜に気に入られてまさかの王国乗っ取り) note  I Was Told To Relinquish My Fiancé To My Little Sister, And The Greatest Dragon Took A Liking To Me And Unbelievably Took Over The Kingdom or it's official English title My Little Sister Stole My Fiance: The Strongest Dragon Favors Me And Plans To Take Over The Kingdom? is a fantasy romance web Light Novel and manga series written by Kashiwaten with illustrations by COMTA and hi8mugi.