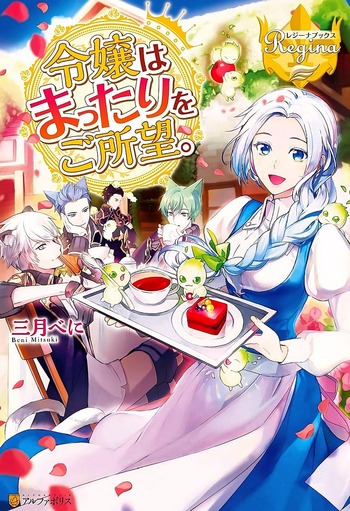 Ronia Gavizera is the 16-year-old reincarnation of a Japanese woman, who tragically died from overworking. Retaining the memories of her past life, the woman realized that she was now living the life of the villainous noble, Ronia, of a web novel she used to read.

Expecting her fiancé to fall in love with the heroine and cancel their engagement, Ronia used her eventual banishment as an opportunity to set up a café in the town of Domskhasa near the border of the kingdom, where she could finally relax. This is where she meets a group of shunned beastkin mercenaries, who are instantly drawn to Ronia's beauty and kindness.

My Lady Just Wants to Relax (Reijou wa Mattari wo Goshomou) is a light novel, written by Mitsuki Beni with illustrations by RAHWIA, published by Alphapolis since April 2018. In March 2019, it received a manga adaptation.

My Lady Just Wants to Relax provides examples of: