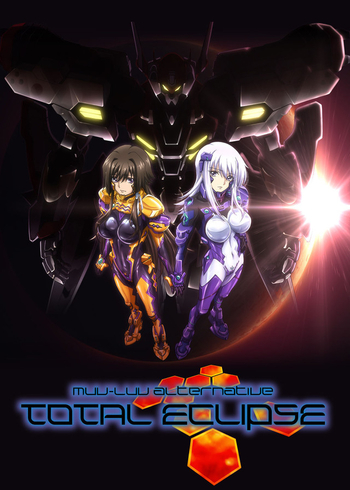 Set in the universe of Muv-Luv Alternative, Muv-Luv Alternative: Total Eclipse is a side story first serialized in Tech Gian, and later published as a series of light novels followed by two manga adaptations. Chronologically the series takes place a few months before the main Alternative story.

A 24-episode anime adaptation by Satelite Inc and ixtl, directed by Takayuki Inagaki and Masaomi Ando, aired from 1 July to 23 December 2012; it was simulcasted on Crunchyroll and is also available on Hulu.

A visual novel adaptation and continuation was released for the PS3 and Xbox 360 in May 2013, with demos for each version available on both the PlayStation Network and Xbox Live Arcade. More information can be found here.

— After Yuuya stops "fighting" with his mech and trying to force it to do things it wasn't designed for in episode 5, he begins to realize its potential strengths in combat.