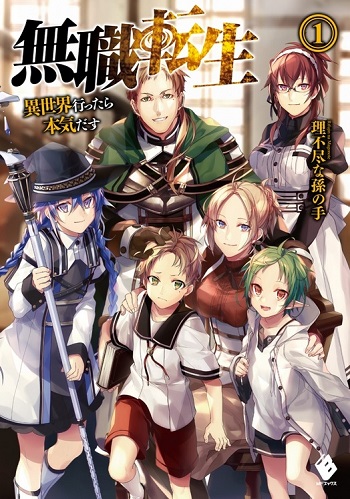 Rudeus Grayrat with his family, Roxy, and Sylphy.
Advertisement:

Mushoku Tenseinote (full title: Mushoku Tensei -Isekai Ittara Honki Dasu-; translation: Jobless Reincarnation -It will be all out if I go to another world-) is a web novel (adapted later into a light novel and manga) written by Rifujin na Magonote and illustrated by Shirotaka.

An Otaku in modern Japan has missed the funeral of his parents, having refused to leave his room for years. His siblings beat him for his sins and throw him out on the streets, leaving him destitute and with no prospects. Pondering his many failures as a person and wishing for a second chance, the man witnesses three teens about to be run down by a truck. He successfully saves them but is killed by the truck.

The man's soul reincarnates in a high fantasy world as Rudeus Grayrat. However he has somehow kept his memories of his past life and swears that he will not waste this chance. With the help of his family and friends, plus knowledge gleamed from his past self's various hobbies, he begins a new life. Follow Rudeus and his adventures from his infantile stage to his adulthood and ultimately his death in this high fantasy story.

An anime adaptation was released in 2021. Teaser

Tropes in Mushoku Tensei include: