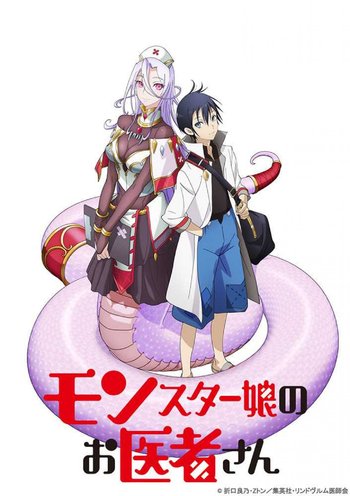 A doctor and his lamia assistant.
Advertisement:

Monster Girl Doctor is a light novel series written by Yoshino Origuchi and illustrated by Z-Ton about a doctor named Glenn Litbeit and his lamia assistant, Saphentite "Sapphee" Neikes, who run a clinic in the town of Lindworm.

Shueisha published ten volumes of the series under their Dash X Bunko imprint from June 24, 2016 to March 25, 2022. A manga adaptation by Pixiv artist Tomasu Kanemaki began serialization online in Tokuma Shoten's Comic Ryū Web magazine on February 26, 2018. An anime television series adaptation by Arvo Animation aired from July 12 to September 27, 2020, with the first episode receiving an earlier screening on July 4. Crunchyroll simulcasted the series. The first episode can be viewed here

The series is licensed in North America by Seven Seas Entertainment.

The last of the gigas, a race that challenged the gods millennia ago.

Example of:
Our Giants Are Bigger

The last of the gigas, a race that challenged the gods millennia ago.