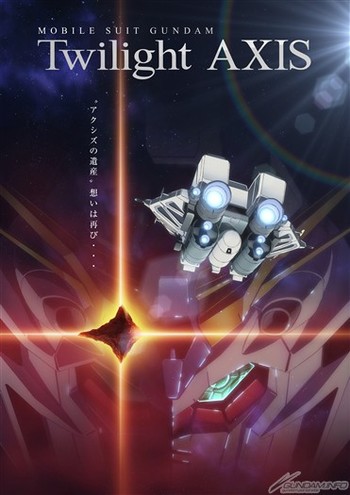 Mobile Suit Gundam Twilight AXIS is a light novel published by Sunrise's light novel subsidiary Yatate Bunko and writen by Koujirou Nakamura, with Ark Performance handling story composition and illustration. It got a Net Anime adaptation in June 2017, with music by Takashi Ohmama and Se Jun Kim as the directornote With being the assistant director of Mobile Suit Gundam Unicorn and the animation director of Gundam Build Fighters already under his belt, this made his directorial debut.

A few months after the events of Mobile Suit Gundam Unicorn, two former members of the Principality of Zeon (Arlette Armaju and Danton Haireg, a former weapons developer and a former test pilot respectively), are hired by Mehmet Merka to join a Earth Federation Forces special operations unit called "Mastema" to investigate the shattered Axis outside the Earth's orbit, in order to search for a supposed Psycoframe research laboratory and recover any intelligence if present. However, they are attacked by a Cyber Newtype named Quentin Fermo, who is piloting an upgraded Alex Gundam known as "Tristan".

Now has a characters page in progress.