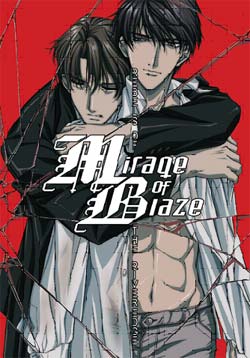 Mirage of Blaze is a light novel series written by Mizuna Kuwabara and illustrated by Kazuma Toujou (from volumes 1 to 11) and Shouko Hamada (volumes 12 to 42), which was published from 1990 to 2007 for 42 volumes. It was adapted into a thirteen episode anime season in 2002. A three part OVA titled Rebels of the River Edge was released in 2004. The translation of the light novels can be found here

Ougi Takaya is a seventeen year old high school student whose life changes drastically when he is attacked by a man with supernatural powers, a confrontation which awakens the same abilities in him. The man identifies himself as Naoe Nobutsuna and claims Takaya is Lord Kagetora, adopted son of Uesugi Kenshin whom he has sworn to serve. He reveals that the source of their powers stems from the fact that they are Possessors, souls who have been possessing human bodies for over four hundred years.

With Kagetora as their leader, the Possessors have been fighting the Feudal Underworld, an army of vengeful spirits of samurai who fell during the Warring States era. Some of these spirits are also able to possess bodies and do so in order to restart the wars, this time to end them in their favor. Takaya has no memory of this however and and refuses to believe he is Kagetora. As he begins to remember however, he becomes increasingly distraught and begins to draw on Naoe for support, but Naoe is neither the mentor nor the convenient protector Takaya thinks he is.

One of the main themes that make Mirage of Blaze stand out is the complicated relationship of Kagetora and Naoe.

Mirage of Blaze provides examples of: