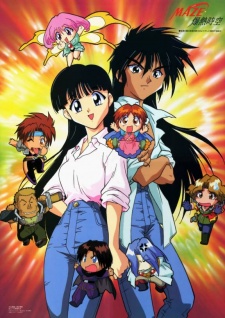 Mei Ikaruga is a mild-mannered Japanese college student who one day wakes up in a lost forest with no idea how she got there or anything else except that her name is Maze. She promptly meets the princess Mill, being pursued by a band of savage humanoids, then by knights who can summon demiarmors to fight in. At this point she finds that in this world she is a powerful "luminator" who can pilot Mill's own demiarmor. Mill's kingdom of Bartonia has just been overrun by an evil force, the Jaina Holy Group led by the Creator, and Maze decides to protect Mill and fight back. They will need allies for this grand undertaking.

Then the sun goes down, and Maze abruptly turns into a male Handsome Lech. The life of the dual-gendered protagonist has just gotten a lot more complicated.