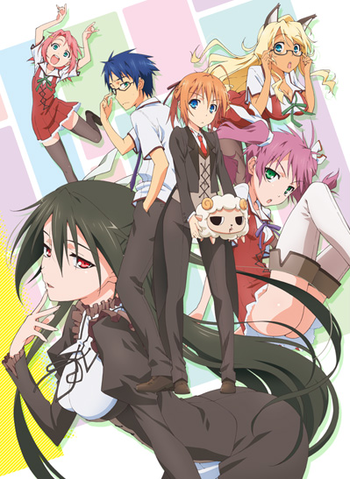 aka: Mayoeru Shitsuji to Chicken na Ore to (The Wavering Butler and Me, the Chicken)

Kinjiro "Jiro" Sakamachi fears women, to the point of nosebleeding whenever he is touched by women. It doesn't help that his younger sister, Kureha, wakes him up with excruciatingly painful wrestling moves — a trait inherited from their mother, herself a former champion wrestler. His only escape is high school.

All that comes to a screeching halt the moment he finds Subaru Konoe — butler of the school's Onee-sama, Kanade Suzutsuki, and a ridiculously handsome Chick Magnet — in the men's comfort room... and gropes his way into discovering that "he" IS a she!

After being knocked unconscious by Subaru, Jiro wakes up with all his limbs save his left arm chained to a clinic bed. He discovers the sadistic side of Kanade, who then blackmails him into keeping Subaru's gender a secret — and with good reason. Subaru was the exception to her family's centuries-old prohibition against allowing females to serve as butlers for the Suzutsuki family, due to being the only child, provided she keep her gender secret from the rest of her classmates at Rouran Academy throughout her tenure. He agrees to keep it so, after Kanade also promised to help cure his gynophobia.

Looks like Jiro will be safe from girls no more, wherever he goes.

Originally a Light Novel by Hajime Asano, it has an ongoing manga and an anime which started airing in the Summer 2011 Anime season. Also has a spinoff, Mayo Mayo!, which follows the life of another Ordinary High-School Student, female freshman Mayoi Hinata, whom Kanade pressures into becoming one of her household's maids after becoming the second person outside her household to discover Subaru's secret.