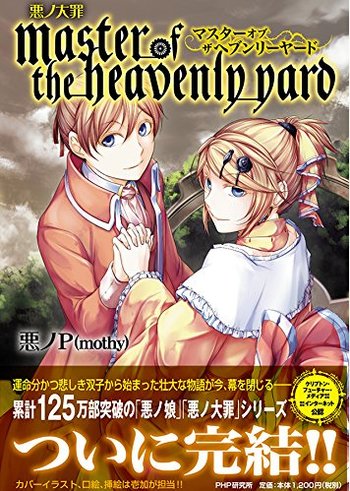 Deadly Sins of Evil: master of the heavenly yard is a light novel written by mothy with accompanying illustrations by Ichika, released in 2017.
Advertisement:

The story picks up where the last novel left off, and also serves as a continuation of the Seven Crimes And Punishments story. The world has been destroyed and everyone is a spirit wandering around the ground world as it has merged with the Hellish Yard. Allen Avadonia and his friends, including the still-alive Nemesis Sudou, have set out to secure a better ending for the world, the "Heavenly" ending, with the added mission of Allen trying to finally reunite with his sister Riliane. Meanwhile, other forces are at work that threaten Riliane and the rest of the cast, with the deceased Gammon Octo leading the extremist Tasan Party to capture and seemingly destroy those who had contracted with the Demons of Sin. The battle between spirits, demons, and gods begins to decide what kind of ending the world of Evillious is meant to have.

The novel concerns a large cast as several characters from other Evillious light novels make an appearance in the story, and likewise takes place over a wide range of locations from previous installments. It is meant to serve as a Finale for all of the Evillious light novels as a whole, and as is tradition for mothy it contains a lot of shocking revelations and plot twists about the story. As such, it's recommended that you read the preceding novels in the series first to prevent being spoiled for all of the series' other plot twists.

The novel is preceded by The Muzzle Of Nemesis.

master of the heavenly yard provides the following tropes: