Light Novel / Maria Watches Over Us 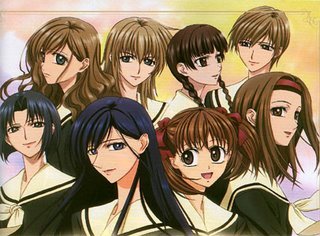 "Maria Watches Over Us" (Maria-sama ga Miteru [i.e. the Virgin Mary] or "Marimite") is set in Lillian Girls' Academy, a Catholic all-girls' High School. The school has a "soeur system", in which an older student adopts a younger student by giving the younger student her rosary, frequently having elements of a Pseudo-Romantic Friendship.

The student body is led by a self-perpetuating oligarchy (it's supposedly democratic in theory, but due to 100% incumbency as shown by the failed Rosa Kanina candidacy...) called the Yamayurikai, of three groups of soeurs. The oldest students are three leaders elected in a rubber-stamp election by the student body at large. Their petites soeurs, in their second year are upgraded to Boutons (rosebuds), and so on. This leads to lots of Gratuitous French such as "Rosa Chinensis en Bouton Petite Soeur".

Yumi Fukuzawa is a first-year student who idolizes Sachiko Ogasawara, the Rosa Chinensis en Bouton. One autumn day, Sachiko stops Yumi as the two pray to the statue of the Virgin Mary, to correct Yumi for having an improperly tied scarf. Later that day, Sachiko abruptly asks Yumi to be her petite soeur, despite having only just met her. The rest of the Yamayurikai objects... and Yumi, feeling unworthy, turns Sachiko down. Sachiko vows to win Yumi as her soeur by hook or crook...

Maria Watches Over Us started out as a popular series of light novels written by Oyuki Konno and illustrated by Reine Hibiki, which were published from 1998 to 2012. It was adapted into a 12-Episode Anime in 2004, with a second season (titled Printemps) during the same year, a third season released as an OVA from 2006 to 2007, and a fourth and final season airing in 2009 after a prolonged wait. The show has been licensed in its entirety for North American distribution by Nozomi Entertainment/Right Stuf... with subs only. There is a dub version, but it's only available on Animax Asia.

In 2010, the series was made into a Japanese live-action film.

Not to be confused with a food spread made from yeast extract that's known for its distinctive and controversial flavor.

Maria Watches Over Us provides examples of: