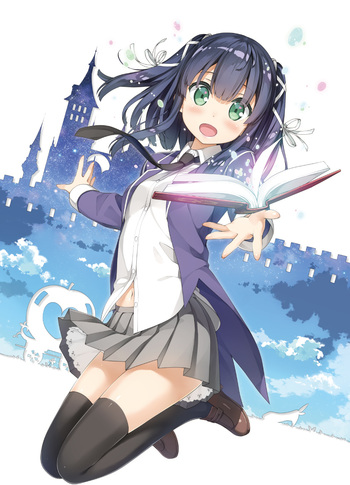 Hazuki must find her own story.
Hazuki Kagimura is a normal girl who spends most of her time reading books alone, until her life changes forever when she visits a library and discovers one of its bookshelves is actually a portal to another world. There, she meets Shizuka Tsuchimikado and discovers the world of mädchen, witches bonded with fairy tale books named Origins. Shizuka helps Hazuki realize she herself is a mädchen and her Origin is Cinderella and introduces her to a school for mädchen so she can learn to control her new magic. So begins Hazuki's new life as a mädchen.
Advertisement:

Märchen Mädchen (メルヘン・メドヘン, "Fairy Tale Girls") is a Japanese light novel series written by Tomohiro Matsu and StoryWorks. It is published by Shueisha under their Dash X Bunko imprint; and has spawned 3 volumes as of December 2017. Hoods Entertainment produced an Animated Adaptation, which premiered on January 11, 2018.