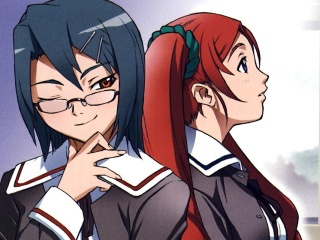 Mayo (right) and Shion, looking totally unprepared for the "interesting times" they're about to live in.
Advertisement:

Meet Mayo Kagura, age 15, and new transfer student to Hoshinomiya Fuuka Academy in Hokkaido, Japan. She's got psychic powers and a large set of handcuffs, and no idea how she managed to get either. When she gets caught in an intrascholastic war between other psychic-powered individuals (including her partial-amnesiac childhood friend, Shion Tennouji), Mayo learns that someone out there is deliberately trying to awaken a terrible power sealed within her. As flashes of this "alternate personality" eventually manifest and cause widespread damage to the school, will Mayo and her new schoolmates make it through the year in one piece?

This light novel is an Alternate Continuity to the My-HiME anime series, so expect to see a handful of familiar characters (Shizuru, Haruka, Natsuki, Yukino, etc.), even if their roles aren't exactly the same as you remember them.