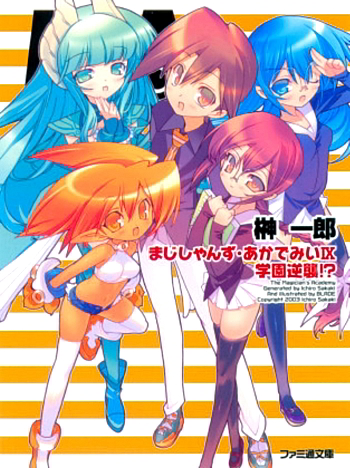 Takuto Hasegawa is an Ordinary High-School Student, but his high school is of a different sort. The Magician's Academy, a place dedicated to training mages and mystical creatures of all sorts. It is insane. During a summoning exam, Takuto accidentally summons an insanely powerful familiar in Tanarot, a girl with the mind of a child and enough power to destroy a country. Luckily, Tanarot is loyal to her creator/"husband".

Macademi Wasshoi is very much a Widget Series. Only two of the cast, at best, notice how odd the workings of the world are. There are some serious moments, but for the most part it's off the wall comedy fueled by magic and fanboys.

Based on the Magician's Academy series of Light Novels and turned into a 12-Episode Anime.