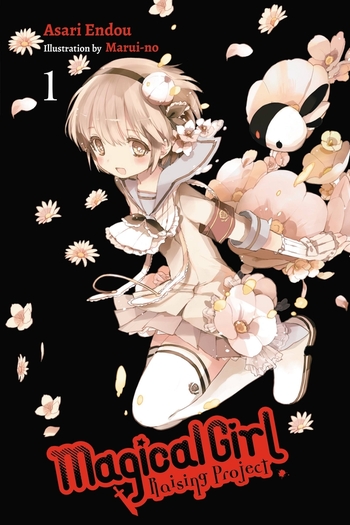 Magical girl Snow White and mascot Fav from the first arc.* Trying to fit everyone into one image would get crowded fast.

Beyond our world there exists a land called the Magical Kingdom. Unknown to the general public of Earth, the Kingdom has under its employ a variety of magical girls. With enhanced strength, speed, stamina, healing, beauty, and other attributes, including a particular type of magic exclusive to each individual, these magical girls can do anything from the most menial tasks to jobs that would definitely kill an ordinary human.

There's just one problem: the selection process is far from perfect. Since anyone with magical potential can become a magical girl, regardless of age, gender, or species, there's nothing to stop someone with malicious motives from gaining such incredible power. As such, innocent magical girls often get caught up in the machinations of these villains with little idea on how to stop them. It will take more than just a cute outfit and flashy magic to defeat these nefarious beings for good.

Magical Girl Raising Project (魔法少女育成計画, Mahou Shoujo Ikusei Keikaku) is an urban fantasy light novel series written by Asari Endou with illustrations by Marui-no. Each arc introduces a cast of sixteen magical girls and places them in a situation where they have to fight each other, often to the death. The series began in 2012 and is currently ongoing. Yen Press is in charge of the English release.

The first arc was adapted into an anime. Production was handled by Lerche, and it aired during the Fall 2016 season. It can be streamed on Crunchyroll.

A spin-off manga called Magical Girl Raising Project F2P began in 2016 and ended in 2017. The art was drawn by Ryouta Yuzuki. F2P focuses on a separate cast of characters from the main series.

Advertisement:
List of volumes and short stories:
Description of arcs: