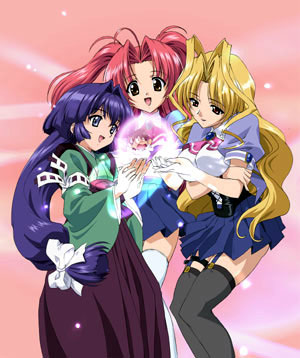 "I'm Shikimori Kazuki, a seventeen-year-old attending Aoi Gakuen. Really, I'm such a worthless guy that girls won't even look at me. Then, all of a sudden, three beautiful girls appeared in my life out of nowhere! But, what they were after wasn't really me... it was my genes!"
— Shikimori Kazuki, Maburaho intro
Advertisement:

Maburaho is a series of Light Novels written by Toshihiko Tsukiji and illustrated by Eiji Komatsu, which was serialized in Dragon Magazine from 2000 to 2011 and compiled into 30 volumes. A 24-episode anime adaptation aired from 2003 to 2004.

Not to be confused with Mahoraba, or the town in Destiny of the Shrine Maiden, Mahoroba.