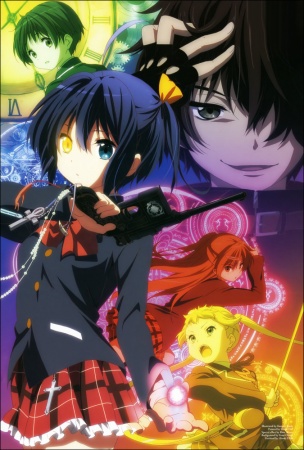 The series is nothing like this.
"Reality, be bent! Synapse, break! Vanishment, this world!"
Advertisement:

When entering the final years of middle school, kids have a tendency to develop hyperactive imaginations, grandiose delusions, and begin believing they have special powers — a condition humorously known as Chuunibyou. Yuuta Togashi, aka "Dark Flame Master", was no exception. After becoming a social pariah for his strange behavior, Yuuta now cringes at any reminder of those days, and seeks a normal, peaceful, friend-filled life as he starts his first year of high school.

After entering a high school where nobody knows him and his past, his plans to return to normalcy get abruptly smashed to pieces by a cute classmate and new next-door neighbour of his — a bandaged, eyepatched girl in a gothic lolita outfit named Rikka Takanashi. Still consumed by chuunibyou, Rikka embraces Yuuta's past and tightly bonds to him — pulling him back into the fantasy world while he pulls her into the real world. Along with Rikka's best friend and underclassman Sanae Dekomori, the napping-obsessed upperclassman Kumin Tsuyuri, and former chuunibyou class representative Shinka Nibutani, the five form The Far East Magical Napping Society of Summer — a place where they can hang out and become closer to each other while wrapped in the magic of chuunibyou.

Love, Chunibyo & Other Delusions (Chuunibyou Demo Koi ga Shitai!, literally "Want to Love Despite Chuunibyou!") is a 2011 Light Novel series written by Torako and illustrated by Nozomi Ousaka, published by Kyoto Animation (no mistake here, this is the first (not anime original) property that the company owns full rights for), which also produced two anime adaptations for the Fall 2012 Anime lineup. The show was directed by Tatsuya Ishihara and written by Jukki Hanada, with Kazumi Ikeda serving as character designer and chief animation director. It is a 12-Episode Anime series which adapts and heavily expands the first volume of the light novel, with a series of accompanying 5-minute shorts Chuunibyou Demo Koi ga Shitai! Lite! found on the studio's YouTube channel. It is licensed in North America by Sentai Filmworks.

A second season was made

The Anime Network simulcasted the anime under the titles Love, Chunibyo & Other Delusions!

. Both seasons can also be found

and Hulu for the US and Canada. Madman Entertainment is streaming for Australia and New Zealand.

If you were looking for the trope, see Chuunibyou.