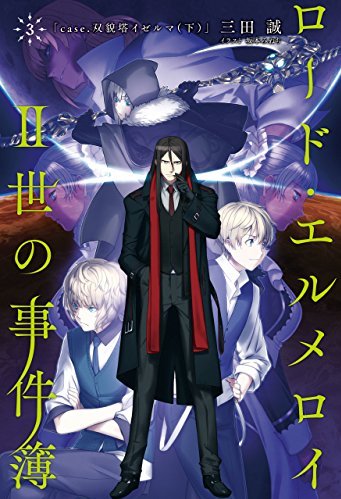 The ‘whydunnit’—why they committed the crime in the first place—that remains a possibility. A person’s Elemental affinity will reflect their nature. Magecraft is no different. For magi, who have been steeped in the story of magecraft since before they were even born, whether they accept that fate or rebel against it, it will doubtlessly brand them down to their very core. In that way, no one is as incapable of lying as a magus.
—Lord El-Melloi II
Advertisement:

Lord El-Melloi II Case Files (ロード・エルメロイⅡ世の事件簿) is a light novel series written by Makoto Sanda and illustrated by Mineji Sakamoto and takes place in the Nasuverse, as a spinoff of the Fate series. The series ran for 10 novels from December 2014 to May 2019; currently, they're only available in Japan.

Set ten years after Fate/Zero, Waver Velvet has taken the title of his former master as Lord El-Melloi II and taken charge of the Clock Tower's Modern Magecraft department. However, his rise to "glory" has been compounded by resentment from other magi. Deals made have resulted in debts to be paid and often he is called in to solve problems.

These are the Lord El-Melloi II Case Files.

A sequel light novel series, The Adventures of Lord El-Melloi II (ロード・エルメロイⅡ世の冒険), was announced in December 2019, with the first novel released in December 2020. It takes place several years later, after Fate/stay night.