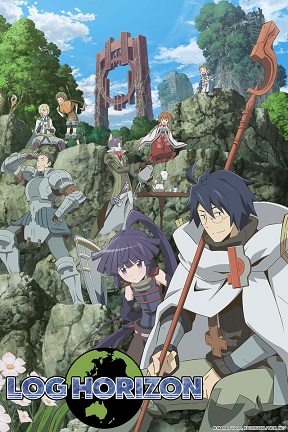 "Elder Tale" is an established MMORPG set in a post-apocalyptic version of Earth where magic and fantasy have grown over the ruins of the previous world. On the day that a new expansion pack was scheduled to become active, every single player logged into the server suddenly found themselves within the world of Elder Tale. Most of the game functions are still active and "death" simply revives the player at their last home point. But in every other sense, the world is "real" and hundreds of thousands of players are now trapped in what used to be a game.

With no indication of how or why this incident occurred, the players of Elder Tale must learn how to survive in this strange new world while they look for a way home.

Though similar in premise to the well-established and well-known .hack and Sword Art Online franchises, Log Horizon is notable in several ways: it takes great care to explain the internal logic and mechanics of the game world, player death is treated as a relatively minor inconvenience, and it is very focused on the lifestyle aspects of the various characters as they all adjust to living in this strange space. The drama of dying in the game world doesn't exist, and so the plot can instead center on how they settle into their new lives in the game, which has a whole host of preexisting rules, laws, and societies to make things interesting.

Log Horizon is written by Mamare Touno, who also created the Maoyu light novels. It has been adapted into a 2-season anime series which aired on NHK from October 2013 to March 2015. It can be watched legally on Crunchyroll

, for people living in the following areas: UK, Ireland, South Africa, Australia, New Zealand, Latin America, Scandinavia, and the Netherlands. A third season was later announced in January 2020 with an October 2020 release, though it was later delayed to January 2021.

Not surprisingly, the story has its own share of spinoffs:

The series is notable for prompting a surprise visit by Mamare himself to 4chan for an impromptu Q&A session with English-speaking fans, which was followed up by two more in the wake of episodes 10 and 25.

The rulebook for a Dungeons & Dragons-style tabletop RPG based on the series was released in March 2014, accompanied by a story of a session played using the rules by four authors

◊ — Ayasato Keiji (Beyond Another Darkness, Marginal Operation), Murasaki Yukiya (Altina the Sword Princess), Maruyama Kugane (OVERLORD), Shibamura Yuuri (Gunparade March: Another Princess). Set during the initial few days after the Catastrophe in the Ritorabure Islands (based on the RL Bonin Islands), four stranded Adventurers attempt to find a way to return to the mainland. On their way back they come across a mysterious Lander girl Nagi, and gets involved the incident surrounding her loss of memory.

Finally, as a general warning, this page covers tropes seen both in the anime and the light novels, as well as the various spin-offs. As such, fans of the anime (even those who have seen every episode) should be careful about reading through spoilers, as many reference plot points that have yet to come up in the anime. Consider yourself as having been warned. Also, all character tropes should be moved to the appropriate character page whenever possible.

Not related to Horizon in the Middle of Nowhere or Legend of Galactic Heroes (commonly abbreviated as LoGH and thus, confused for Log Horizon).

open/close all folders
# to D
E to J
K to R
S to Z
We will change the world.