Light Novel / Living as I Please, As a Loli Demon King 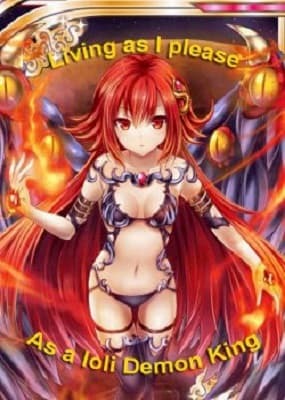 I can live and be as perverted as I want? AWESOME! Just wait until I get even with that bastard Ren who murdered me!
The story follows the adventures of Ryusei Homura who has a life very similar to Hajime from Arifureta: From Commonplace to World's Strongest, but with a twist. After being murdered by his classmate, Ren, the ringleader of the entire class who tried to bully him to death for the "crime" of being in a Childhood Friend Romance with the girl Ren wanted to make his personal Sex Slave, instead of crawling out of a dungeon, Ryusei reincarnates into a Horny Devil Milla, The Demon King of Insanity. Unlike Hajime who eventually becomes indifferent to his former classmates, Milla keeps Ryusei's grudges alive and well and has no problems giving all his bullies a Cruel and Unusual Death when she meets them, especially since said classmates are leading a genocidal human supremacist army, deluding themselves into thinking they're heroes.

Living as I Please, As a Loli Demon King is an Original Web Novel written by Waxford. It is completed with 124 chapters. Hosted on Re:Library

Living As I Please, as tropes: