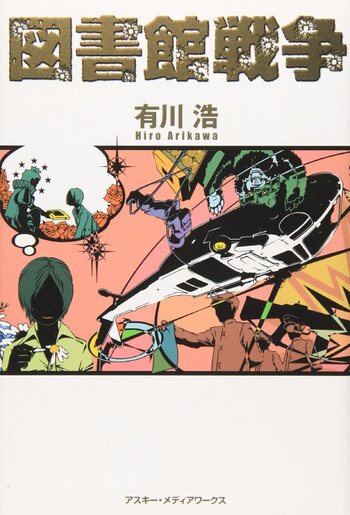 Library War (図書館戦争, Toshokan Sensō in Japanese) is an award-wining Light-Novel series that was later adapted as an anime with three manga adaptations and two live-action movie adaptations. The anime is distributed by Discotek and be viewed online via Website/Crunchyroll, provided that you live in a country/territory where your viewing rights aren't restricted.

Set in 2019, during an alternate timeline where the Japanese government has issued the Media Betterment Act in the Diet, to prevent the spread of supposedly dangerous information by allowing censorship and go after violators through the Ministry of Justice's Media Betterment Committee. In response, local governments have set up the Library Defense Force to fight against the censorship of the MBC and their proxies who frequently raid libraries, bookstores and other places of interest.

The story itself centers around Iku Kasahara, a recruit in the Force, who joined after being inspired by a mysterious Defense Force member who protected her and a book she was trying to buy that was being targeted for censorship in Ibaraki. However, she quickly learns how demanding the LDF can be, mainly from her "demon" instructor, Atsushi Doujo. Despite making several huge mistakes at first, Iku is promoted to her base's Library Task Force, which is essentially the most elite branch of the Defense Force and she makes history for being the first woman to be successfully recruited.

As the series goes on, she begins to improve in her duties, and she even finds out more about the mysterious "princely" figure that inspired her all those years ago... While helping her friends, allies and colleagues defend the freedom of information from the MBC.