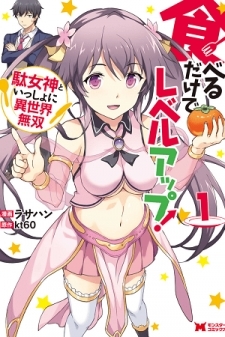 Kehma, your special skill is cracking eggs one-handed? WHAT KIND OF SPECIAL SKILL IS THAT!!!!???
Self-proclaimed Goddess of Wisdom Laura Gine Amara gets booted out of Heaven for lazing around too much, causing a major loss of faith in her from her followers. After a great deal of begging, bowing, and scraping, she gets a lottery ticket to summon one champion. When she runs out of food and finds that she has no other prospects, she uses it. The result is Kazota Kehma who by sheer coincidence had put a coin in the donation box to a shrine and wished to go to another world. He is not pleased to find himself at the beck and call of a stupid, lazy, and incompetent goddess who is expecting him to fix her problems. Fortunately for the both of them, once the goddess gets an offering of food from him, she learns that he's got an extremely rare, calamity-inducing skill, Magic Absorption that allows him to get stronger by eating, both by gaining levels and copying the special abilities of any monster he eats.

Similar in premise to Isekai Cheat Survival Meshi but with a goddess and an
Advertisement:
RPG Mechanicsverse.

Level Up Just by Tropes: