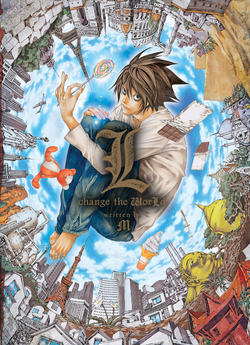 In 2007 a Light Novel was published in Japan based on the movie L: change the WorLd, which was itself a Spin-Off of the popular Death Note franchise. The novel in itself is pretty short, with only a total of 188 pages.

It's an alternative continuity to both the main Death Note series and the film it was based on. The story centers around L and his last 23 days on earth and twenty-two days to save the world from a terrorist group called Blue Ship whose main goal is to purify the world by killing off most of humanity with a deadly virus.