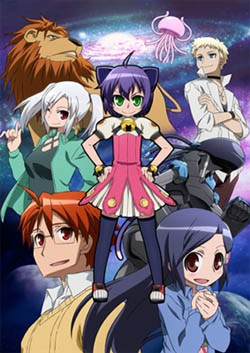 (a.k.a. Frenzied Family Diary, or Diary of a Crazed Family)

A thousand years ago, Enka, an evil dragon thing, was defeated, but died cursing that its child would destroy the world in... a thousand years. In the present day, DNA testing has narrowed it down to six candidates. Ouka, a paranormal investigator, is ordered by the government to marry one candidate (Kyouka) and adopt the rest as children, in the hopes of discovering the true child of Enka and raise it in a loving family situation to placate it.

The Top Six "Most Likely To Destroy The World", now the Midarezaki Family:

In addition to those character types, KKN uses the following tropes: