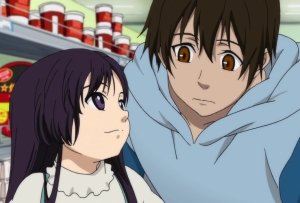 Shinkurou Kurenai is a 16 year old boy who earns his living by settling disputes between people. This usually involves some degree of violence, which he deals with just fine, as he is very strong and proficient at martial arts.

One day he gets a very special assignment: being the bodyguard of Murasaki Kuhoin, a 7 year old girl from a very rich, plutocratic family. At first he has quite a bit of trouble with her snobbish nature, which is obviously the result of the very sheltered upbringing within the "Inner Sanctuary" of her family estate. As they spend their time together, they start to appreciate each other more and more, leading to a deep friendship which affects their lives immensely.

The series started out as a Light Novel series but has grown to include both a manga and an anime adaption. The anime ends after the first arc, but both the original light novels and manga are ongoing. The series takes place in the same universe as Denpa Teki na Kanojo.