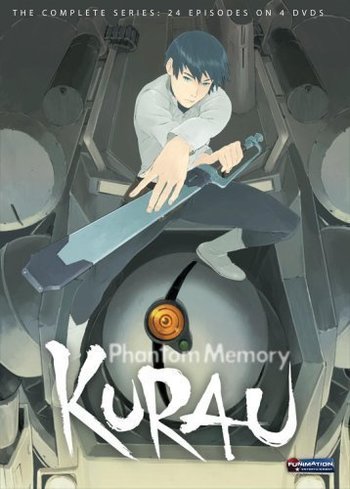 Kurau Phantom Memory (Japanese: クラウ ファントムメモリー, Hepburn: Kurau Fantomu Memorī) is a 2004 science fiction anime series, produced by Studio Bones and Media Factory, which was broadcast in Japan by the anime television networks Animax and TV Asahi. Set primarily in the year 2110, it explores themes such as inter-familial relationships and ethics in science. The series was licensed by A.D. Vision for North American localization for $960,000 since the first episode aired, and the first DVD was released on April 10, 2007. In 2008, the series was transferred from A.D. Vision to Funimation Entertainment, along with over 30 other titles.

In the year 2100, Dr. Amami is a scientist working in the field of alternative energy, who at the beginning of the series is on the verge of a major breakthrough in the area of "Rynax energy". His daughter Kurau accompanies him to the lab on her twelfth birthday, where an experiment goes horribly wrong and she is struck by a bolt of this energy, which disperses her into lights.

When she reforms, it is found that her body has been taken over by two Rynax, who are actually sentient life forms and not just a form of energy. However, one of the Rynax is too weak to awaken. The awakened Rynax takes on Kurau's name and identity, and though her newfound superhuman abilities make her a subject of interest for scientists, Kurau manages to live a relatively normal life. Ten years later, the second Rynax awakens and emerges as a twelve-year-old girl, whom Kurau names Christmas. The two look and interact very much like sisters.