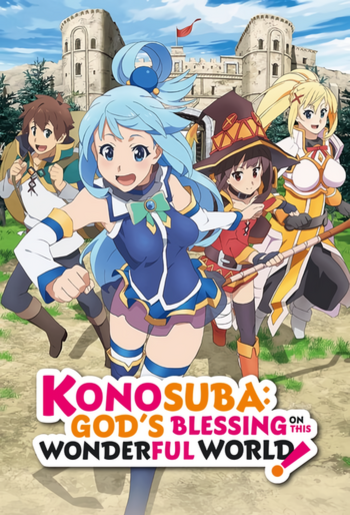 With heroes like these... Who needs better heroes?note From left to right: Kazuma Satou, Aqua, Megumin, Darkness.
"To some folks out there, I bet this looks like the perfect setup, but from where I'm sitting, it's a recipe for disaster!"
— Kazuma Satou
Advertisement:

Kazuma Satou is a hikikomori who died pushing a girl out of the way of a truck, only to wind up in the presence of Aqua, a beautiful self-proclaimed goddess... who proceeds to mock him for his embarrassing demise,note It wasn't a truck, it was a slow-moving tractor that was fully prepared to stop on its own; his actual cause of death was shock-induced cardiac arrest due to thinking he'd been run over. As he died he also pissed himself, and both his family and the hospital staff laughed at how stupid his death was before giving him a choice: either go to heaven to lead a boring afterlife, start over on Earth as a baby... or reincarnate with his current body and memories in a different world in order to defeat a demon king who terrorizes it.

Given his past life as an avid gamer, Kazuma picks the latter option, after which he was told to choose anything, an item or ability of any type, to bring into the new world with him. And out of sheer spite, he chooses Aqua as his "cheat" item to bring. And with that done the two are both dragged into a fantasy world of grand adventure...

...Oh, how Kazuma wishes it were that easy. Instead, he is stuck with three "problem children": Aqua, the narcissistic water goddess; Megumin, a delusional Child Mage; and Darkness, masochistic lady-knight.

Crunchyroll is streaming the anime under the title God's Blessing on this Wonderful World!, which can be viewed here

for audiences worldwide except for Asia, Spain, Portugal, Australia, New Zealand; and German, French, Italian, and Dutch Speaking Europe. The light novels and manga have been licensed by Yen Press.

Blessing this Wonderful World with Tropes: