Light Novel / Konoha Hiden: The Perfect Day for a Wedding 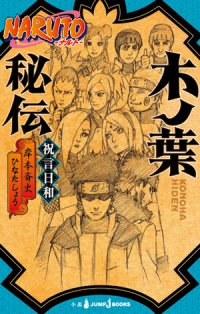 Konoha Hiden: The Perfect Day for a Wedding, written by Shō Hinata, is set a few days before Naruto and Hinata's wedding ceremony. Kakashi Hatake has tasked the Konoha 11 with a very important, top-secret mission: each one of them must find a wedding gift. However, that proves to be a task not so easily accomplished...

Naruto Hiden (a.k.a. Naruto Secret Chronicles) is a light novel series which explores the stories of various characters after the conclusion of the original manga. Though each book is illustrated by Masashi Kishimoto, they are written by different authors. And yes, they are part of the canon continuity—having been adapted as episodes 494 to 500 of the Shippuden anime.