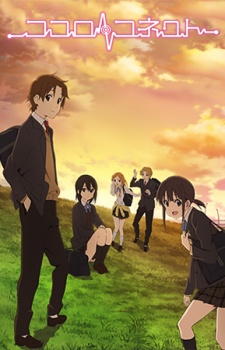 From left to right: Taichi, Inaba, Yui, Aoki, and Nagase.
Everyone has something they don't want others to know. There are things you're better off not knowing.
— Himeko Inaba
Advertisement:

The "love and teen pentagonal comedy" follows the five members of Yamaboshi High's Student Cultural Society club—consisting of three girls and two boys—and their everyday lives as they deal with some very strange phenomena such as randomly switching bodies with each other or having their innermost desires unleashed. It is revealed that the phenomena are caused by a mysterious supernatural entity that goes by the name 'Heartseed' who wants to be entertained.

Kokoro Connect deals with what would happen if people could see different sides of their friends—their darkest and even their most vulnerable sides. Each arc addresses curious dilemmas such how someone would react if they switched bodies with someone else, especially the opposite gender, or what it would be like if people had no inhibitions. This series explores the ramifications such bizarre situations would have on the people themselves and how they might try to fix each others' failings and complexes as they discover them. It is a story of Ordinary High School friends dealing with the ordinary struggles of teenagehood, all the while in the middle of very unordinary situations, and how their friendships survive it all.

US viewers can watch this show legally on Crunchyroll

The light novels were translated by J-Novel Club, with the first volume published on August 22, 2018.

The original light novel series currently consists of eleven volumes, three of which are side stories.

The light novels have a fan-translation here

The anime, by SILVER LINK., ran for 17 episodes. A new arc covering the material from one of the books starts every few episodes. The series is separated like this:

A PSP (non-canon) Visual Novel, Yochi Random, has also been released on 22nd November 2012, featuring an original story taking place in an alternate timeline after the events of Hito Random, with different, serious arc based on each of the 5 main casts' perspectives, as well as a number of comedic side arcs.

We have a Character Sheet right here.