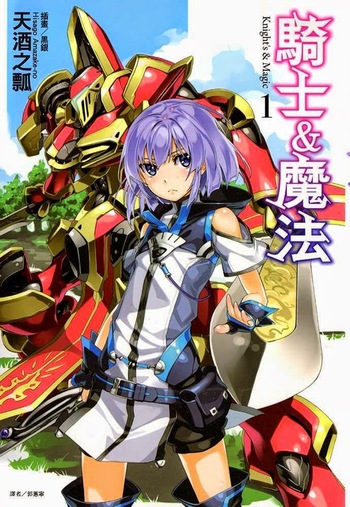 Following a car accident, a mecha otaku is reincarnated into another world as nobleman Ernesti Echevalier, nicknamed Eru. In this world exist huge humanoid weapons known as Silhouette Knights, whose task is to defend humanity from demon beasts — ravenous monsters that, unless stopped, devour everything in sight. Dreaming of piloting the Silhouette Knights, Eru, with childhood friends Archid Walter and Adeltrud Walter, aims to become a Knight Runner. Helping the matter are the memories of his past life, which inspire him to improve his own Knight in ways people from his own world could never imagine.

Knight's & Magic is an ongoing web novel series by Hisago Amazake-no that got started in October 2010 on the online novel platform Shōsetsuka ni Narō, before Shufunotomo's Hero Bunko imprint picked it up and turned it into a light novel series with artist Kurogin being put in charge with illustrations.

A manga adaptation by Takuji Kato started in April 15, 2016 on Square Enix's Young Gangan magazine. An anime adaptation started on July 2, 2017, directed by Yusuke Yamamoto and the animation studio 8-Bit. It is available for legal streaming with subtitles on Crunchyroll here