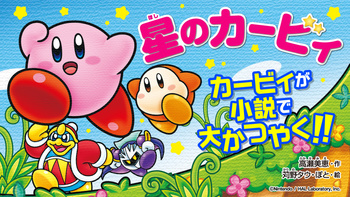 Let’s set off on the exciting adventure with various Copy Abilities!!
"Kirby, Waddle Dee, King Dedede, and Meta Knight solve the cases that occur in Dream Land, a place peaceful enough to make one yawn. There are all sorts of exciting stories like original stories that can only be read at Tsubasa Bunko, Novelizations of big hit games, or side stories where Meta Knight is the protagonist!"
Advertisement:

The series is written by Mie Takase, mostly known for her novelizations of video games such as the Shin Megami Tensei and Ace Attorney series, and illustrated by sisters Tau Karino and Poto Karono. Published by Kadokawa Tsubasa Bunko, the first volume was released in August 2013 and is still ongoing.