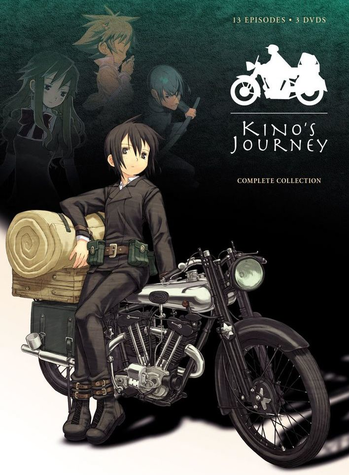 "The world is not beautiful, therefore it is."
Advertisement:

Kino no Tabi, known in English as Kino's Journey (and also using the English title Kino's Travels on official Japanese merchandise), is a Light Novel series by Keiichi Sigsawa which was adapted into a thirteen-episode TV anime series in 2003, one OVA, and two films. In 2017, it received two back-to-back manga adaptations, and a new anime with a new studio premiered October 6, 2017.

It follows the travels of a teenager named Kino as she wanders across the world on her talking motorcycle Hermes, encountering all manner of eccentric people and cultures along the way. Yet the world is as dangerous as it is beautiful, and Kino is often confronted by the uglier aspects of human nature. All that keeps her going is her quick wit, the pistol at her side, and a steadfast rule to stay in a country for no longer than three days and two nights.