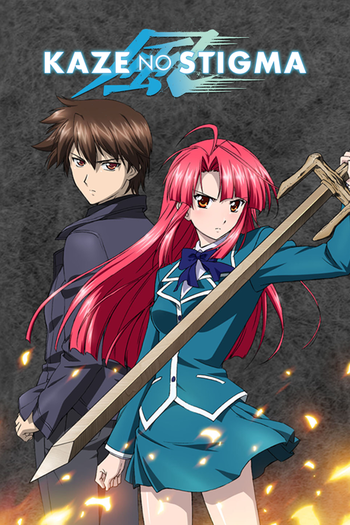 "Eyes as blue as the azure sky. That is the symbol of a 'Contractor'. Entrusted by the Spirit King of the Wind with the powers of his domain. I bear this mark: the Stigma of the Wind."
— Kazuma (Opening Narration)
Advertisement:

Four years ago, Kazuma Kannagi was defeated by his cousin Ayano Kannagi for the right to be the possessor of Enraiha, a sword passed down in the Kannagi family, a powerful and prestigious clan of fire mages. His pathetic defeat and complete failure at the fire arts resulted in his banishment from his family and unspoken exile from Japan.

Now named Kazuma Yagami, he suddenly returns after four years for a casual demon-hunting job, only now, he's somehow become a snarky, crazily-powerful wind mage who easily manhandles demons and his former family alike. And about this time, Kannagi members just happen to start being murdered by a powerful wind mage...

Adapted into anime from a series of light novels by the late Takahiro Yamato.